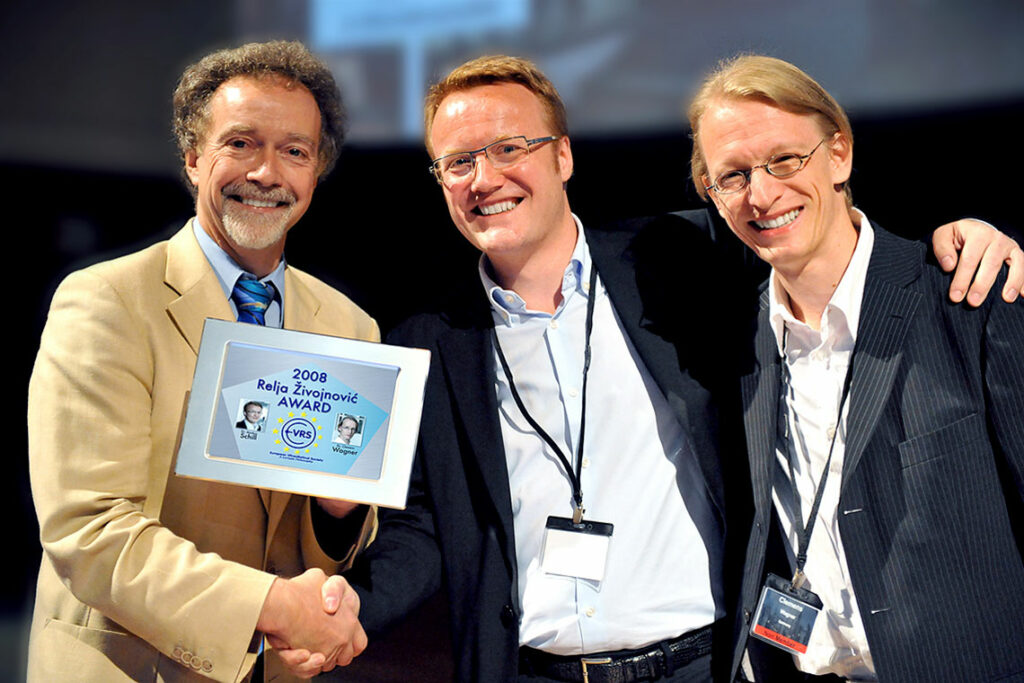 Prague/Mannheim. At the annual meeting of the European VitreoRetinal Society (EVRS) in Prague Dr. Markus Schill and Dr. Clemens Wagner, developers of the eye surgery simulator Eyesi, have been awarded yesterday with the Relja Zivojnovic Award for outstanding contributions to the field of vitreo­retinal surgery.

The award was named after Relja Zivojnovic, considered one of the founders of the vitreoretinal surgical subspecialty, and is awarded yearly to outstanding contributors to the field. The aim of the EVRS is to foster the dialogue on scientific ideas and surgical techniques as well as methods of teaching among European vitreoretinal surgeons.

Dr. Schill and Dr. Wagner, both holding a degree in physics, have been honoured for the development of a virtual-reality-simulator, which enables surgeons to practice vitreoretinal procedures on the human eye and gaining actual surgical experience without putting a patient at risk.

The high-end-simulator was first introduced to the public in 2001. The realistic simulation of tissue behaviour gives users the impression to be performing a real operation. At the same time simulator-based training allows for objective evaluation of the performance. The possibility to repeat surgical procedures under the exact same circumstances is another aspect that enables new methods of teaching in ophthalmic surgery.

Eyesi had originally been developed by an interdisciplinary team of scientists led by Schill and Wagner at the University of Mannheim, Germany, under the supervision of Professor Reinhard Männer. The positive feedback on the simulator when first introduced to ophthalmic surgeons was sufficient encouragement to develop the product to series maturity. Seven scientists of the former team founded the company VRmagic GmbH in 2001. Today Eyesi is in use worldwide. Besides vitreoretinal procedures VRmagic offers an interface and training modules for performing cataract surgery.