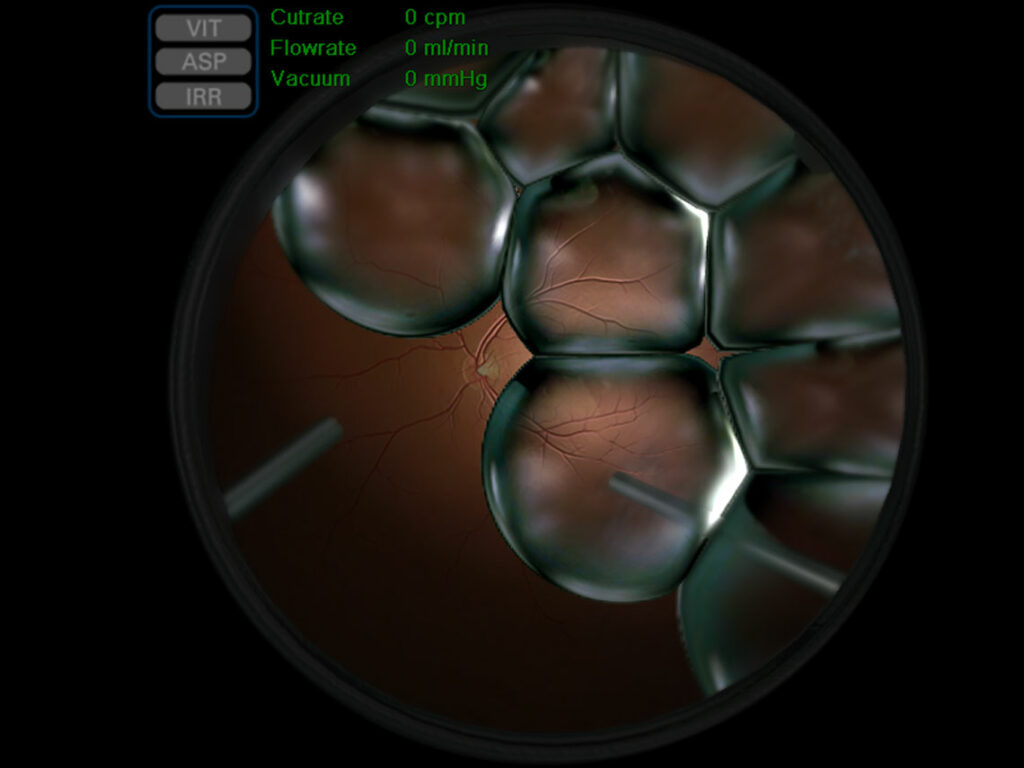 A new software version for the ophthalmic surgery simulator Eyesi Surgical is available. The software release 2.9 covers numerous improvements for the training of cataract surgery, new treatment possibilities in the retinal detachment module, and redesigned vitreoretinal optics and illumination. To reproduce the complete illumination situation in the OR, the red reflex was reworked in all cataract training tasks.

In the training scenario for white cataracts users can now inject air to prevent the endothelium from staining through trypan blue. Further, the visualization was redesigned and offers a more realistic training experience resulting from a less contrasty rhexis edge and an improved tissue behavior of detached membrane fragments.

The training of irrigation and aspiration has been completely reworked. Cortex can be aspirated in a more controlled manner and the tearing behavior of the cortex is visualized more realistically. Thus, the cortex removal feels almost like real surgery. Furthermore, the new software trains the perception of visual warning signals like the formation of star folds when accidentally aspirating the posterior capsule.

The new software version takes greater account of the interaction between the implanted lens and key anatomical structures. A clearer representation of the posterior capsule aids the user in understanding the depth of the capsule. This leads to a heightened awareness of the angle of approach when injecting the IOL.

The handling of the phaco instrument in the divide and conquer module was optimized regarding fluidics and ultrasound and now offers better training possibilities for segmentation and removal of human lenses. Additionally, the aspiration of lens material, the occlusion of the phaco tip, and the removal of the lens are simulated more realistically.

The retinal detachment module was extended by further treatment possibilities. As an alternative to the oil tamponade, trainees now can also use a gas endotamponade. After the PFC phase, the injection of air is possible.

To foster a more complete understanding of optics and illumination before entering the OR, optics and illumination have been redesigned in software version 2.9. Widefield optics for vitreoretinal procedures now accurately reproduce the complex interactions between changing focus, zooming and adjusting auxiliary focus. The widefield lens is visible in the microscope and causes the typical “keyhole” effect.

The new Eyesi Surgical software 2.9 is now delivered to all customers with a valid license.

Further information on the new software release can be found here