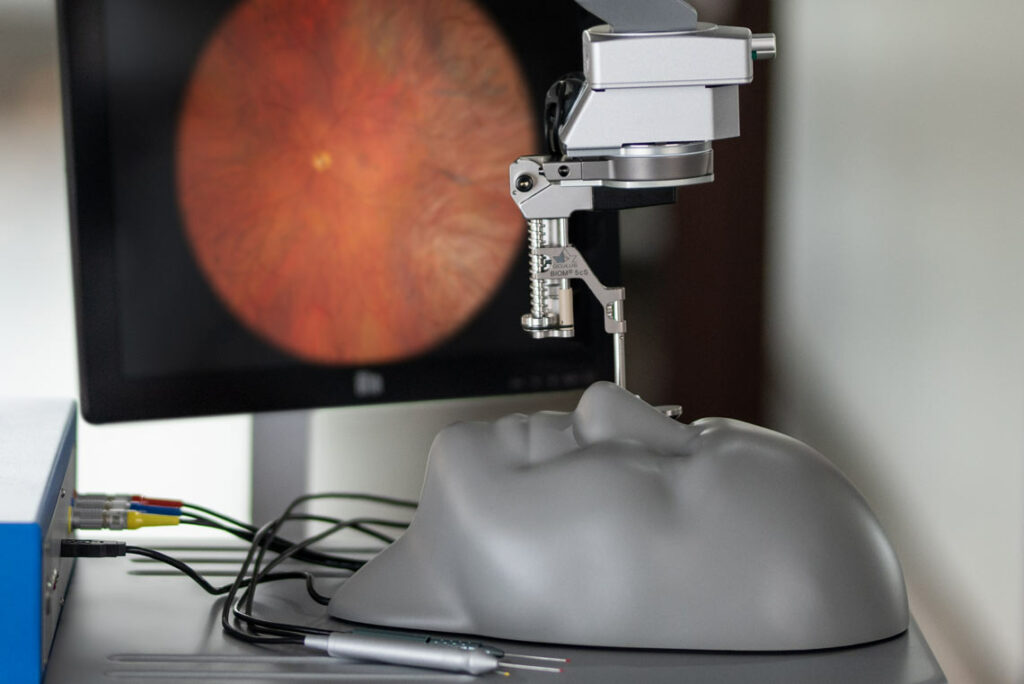 The Eyesi® Surgical simulator now features a mimic of the OCULUS SDI®/BIOM® 5, which can be operated just as the original.

The Eyesi® Surgical simulator will in future be equipped with a mimic of the OCULUS SDI®/BIOM® 5. Manufacturers OCULUS and VRmagic have cooperated closely in order to integrate the current generation of the non-contact wide-angle viewing system for vitreoretinal surgery into the training simulator true to original.

As with the original SDI/BIOM 5, the SDI is activated automatically when the BIOM is swung into the beam path. For this purpose, VRmagic integrated a sensor system for detecting the rotation into the OCULUS hardware and synchronized it with the simulation. Furthermore, in case the lens accidentally touches the cornea, it is detected and visualized in the simulation.

“It´s in the interest of both OCULUS and VRmagic, that simulator training fosters experience with handling the original instruments and optical systems”, says Markus Schill, CEO at VRmagic. “We very much appreciate the successful cooperation we have been having with OCULUS for a long time.”

Right from the first product versions of the Eyesi simulator, a mimic of the OCULUS SDI/BIOM has been available for training of posterior segment surgery. The BIOM is a binocular indirect ophthalmomicroscope, which enables wide-angle observation of the fundus. The SDI, short for stereoscopic diagonal inverter, inverts the image.

For more than 120 years, OCULUS Optikgeräte GmbH has been a trusted partner for eye care professionals around the world. With the highest attention to detail, the devices are designed and manufactured at the OCULUS headquarters, located in Wetzlar, Germany. In the 1980s OCULUS developed the first non-contact wide angle viewing system for vitreoretinal surgery: the SDI®/BIOM®. The OCULUS SDI®/BIOM® set a new global standard for vitreoretinal surgery performed using wide angle viewing. OCULUS Surgical Division is the department for retina specialists at OCULUS Optikgeräte GmbH in Wetzlar.