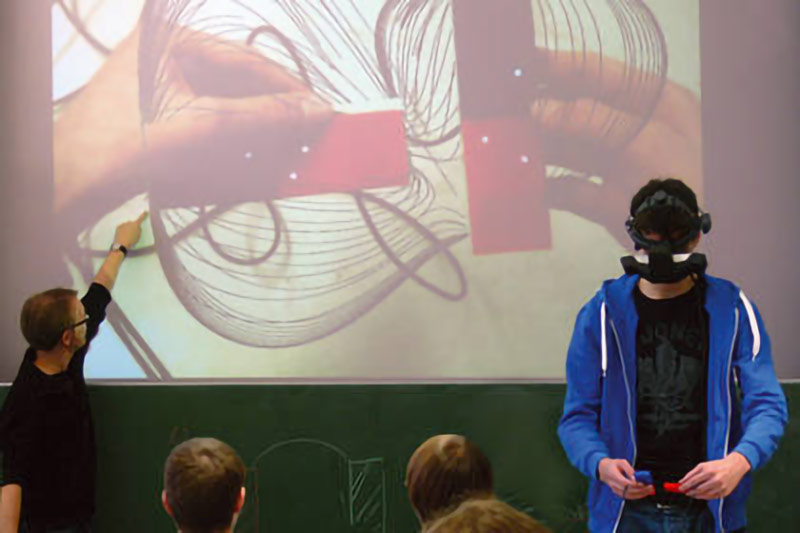 Students in Mannheim test head-mounted display in their physics class

Mannheim. Magnets attract each other at one end and at the other they are repelled. Every student has already tried this out for themselves and experienced the forces of magnetic fields. However, the complex nature of these fields remains a matter of vague theory. In order to allow students to experience the characteristics of magnetic lines of force, an augmented reality simulator has been developed in a cooperation project between the Department of Computer Science at the Bonn-Rhine-Sieg University of Applied Sciences under the direction of Professor André Hinkenjann and the Mannheim-based company VRmagic. This AR simulator allows students not just to feel the interaction of magnetic fields but also to see them three-dimensionally. The German Federal Ministry of Economics and Technology supported development of the simulation technology over a period of one and a half years with a grant of around 250,000 euros. The simulator is now being tested by the students at the Karl-Friedrich High School in Mannheim as part of their physics class.

In the experiment, the students wear a head-mounted display with integrated video cameras and move two bar magnets with their hands. In addition to the live video image of the magnets, they can also see the simulated lines of force of the resultant magnetic fields in 3D in the head-mounted display. Depending on the magnet alignment and distance between the magnets, the students can observe how the forces they can feel correspond to the deformations in the lines of force.

“Experiments are regularly carried out in physics lessons in order to demonstrate physical theories. Nevertheless, it is often difficult for students to understand the relationship between the real world and its physical description. The use of augmented reality helps students to establish a connection between abstract theories and reality,” according to Clemens Wagner, who is responsible for project coordination at VRmagic. “In contrast to the usual visualization forms with small magnetic needles or iron filings, the head-mounted display makes it possible to see the magnetic field and how it changes in time in three-dimensional space.”

In the next step, VRmagic plans to extend the simulation to experiments with other magnet types and electric conductors. “The developed technology can in principle be used wherever physical effects occur that we are unable to see,” explains Wagner.

The simulator system consists of the head-mounted display and a PC. The head-mounted display contains two cameras for stereoscopic image recording of the surroundings. These video images are projected onto small displays in front of the user’s eyes so that the experiment can be observed in the usual way. The head-mounted display also has an integrated optical tracking system which precisely follows the spatial position and orientation of the magnets. The experiment simulation is calculated on the basis of this position data and the generated computer graphics are superposed on the video image. The time delay of the system is so small that the so-called immersion effect occurs where the user is no longer able to tell the difference between the real image and superposed simulation.